“At the last check in, we had won the AL West in 2021, and I’m happy to report that we won the World Series that year,” Lauerman tells us. “While the ticker tape was still falling, we had to make some moves, and Bryce Harper, who we signed after the 2018 season, found his way across the country in Boston, in a deal that got us Andrew Benintendi. This was a really good deal for us, because though they’ve been putting up similar numbers, Benintendi is a little bit younger, at a much lower value.”

Like many championship teams, though, the 2022 Los Angeles Angels had a rough time defending their victory. Lauerman recalls: “The 2022 season was full of ups and downs. In the middle of July, the Red Sox came calling again with an offer we just couldn’t turn down. They wanted Salvador Perez, a 3-star prospect, and Brandon Drury for Mookie Betts. I couldn’t not pull the trigger on this deal. Even if Betts were to walk at the end of the season, we should have boosted our chances enough to make it worthwhile.

“Due to Trent Grisham playing pretty well, and finishing second in the AL in stolen bases, Betts played second base for the rest of the season for us. Since he was such a team player, we decided to award Betts and Benintendi 7-year extensions to stay with the team. In 2023, the plan will be to move Betts back into the outfield, with Trout and Benintendi.

“At the end of August, we were 10 games up on the Astros, and we were riding high. Then, we came crashing down. In September, we had a run where we lost 12 games in a row and let the Astros all the way back in, and they even took over the division lead for a few days. As the season came to an end, we regained the lead, and, with a one-game lead going into the last day of the season, we both lost to our respective opponents, giving us the AL West title and eliminating the Astros from playoff contention.”

Lauerman continues: “The 2022 season ended with some free baseball for fans of some other teams. The Twins and Tigers had to play a game 163 to see who would win the AL Central, and the loser of that, the Tigers, had to go on to play the Rays to determine who would be the second Wild Card team — the Tigers won.”

Would the Angels repeat? Lauerman let us know: “In the AL Division Series, we took on the Twins, who went up 2-0 on us before we ran off 3 straight wins to advance to the AL Championship Series against the Yankees. After splitting the first two games in New York, we lost all three in LA and were eliminated from the playoffs. The Yankees would go on to beat the Nationals, 4 games to 2, in the World Series.”

He concludes: “The future is looking pretty bright right now offensively, but we really need to find some new starting pitchers. Jacob deGrom will be out most of 2023 with a torn UCL, which he suffered in August of 2022, Carlos Carassco isn’t getting any younger, and what’s worse, none of our younger guys really stepped up this year. So it’s time to start looking for some new arms, and maybe even a new pitching coach to go with them. In the front office, we also need to find a new Assistant GM and trainer, as ours both retired at the end of the 2022 season.”

Jardine was about to embark on the 2021 season the last time we talked to him, and he was happy to report that that year marked his first playoff trip with the Milwaukee Brewers. He recalls: “We won the NL Central by 12 games! We then upset the Dodgers in 5 games to move on the NLCS but were thwarted by the Braves, 4 games to 1. Two months into the 2022 season, we’re 29-25 and 3 games back in the division.”

He also noted that “we really shook things up in the 2021-22 offseason! With a tight budget and some future commitments hampering our decisions, we shipped off franchise cores like Christian Yelich, Vic Caratini, Billy Hamilton, German Marquez, and Tyler Jay. We were able to replace them with young, controllable talent like Ronald Acuna, Justus Sheffield and Adonis Media.

“Needless to say, there has been plenty of turnover, but the moves were necessary to help keep financial flexibility on the team.  We have some notable free agents coming up, namely Orlando Arcia, and really would like to have the money to keep him around.” 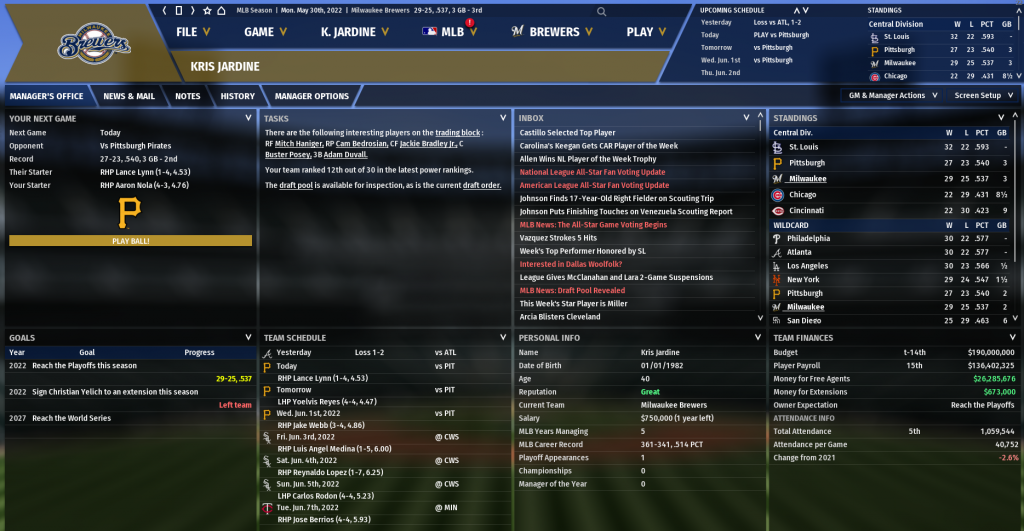 Jardine concludes: “The goal in 2022 is the World Series. Again, facing the possibility of losing Arcia, and with Bryce Harper having an opt-out in his contract, we could see a talent regression in 2023 and beyond, so the goal is to win now and hopefully, be competitive for the next 2-4 years.”

Turning the Florida Panthers® into a contender

Finally, Adam has taken the Florida Panthers® into the 2022-23 season and says “things have gotten better with time. Our young players have finally started developing and we’ve now begun adding pieces to help offset what we felt were minor deficiencies — they are are now beginning to reap the rewards. 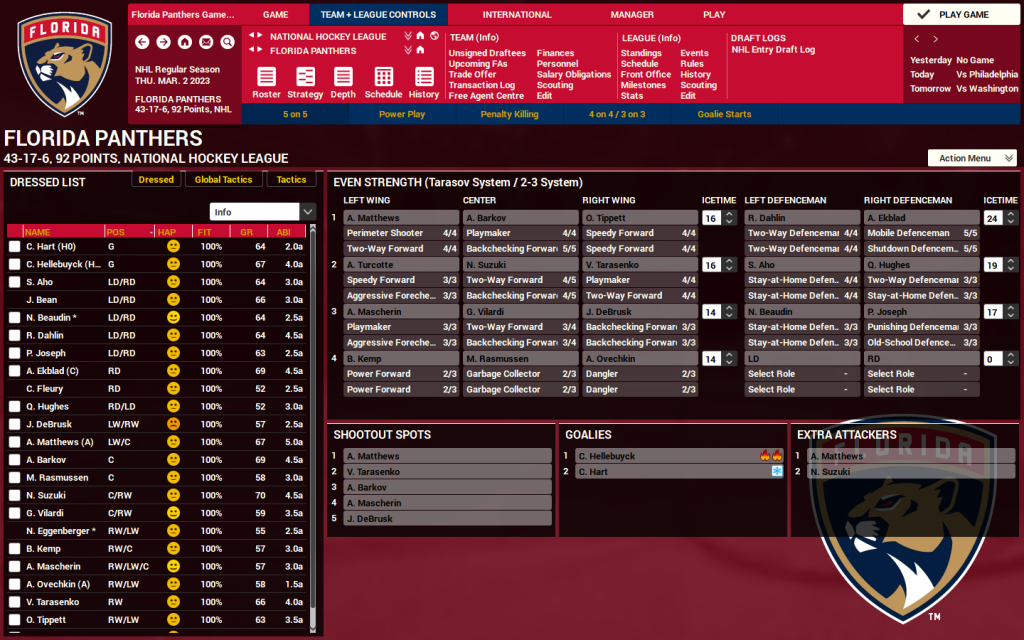 “In our latest stream, we actually just picked up Vladmir Tarasenko at the trade deadline to help boost us for a (hopefully) deep playoff run. We’ve also started finding some success with some hot goaltending and some good scoring, mostly led by Auston Matthews. That pushed us into the playoffs.”

He adds: “However, with a young team and some untimely injuries, we had little success. In the off-season, though we had a couple successful free agent signings (including goaltender Carter Hart to be our #2).”

The 2022-23 season, though, has been “amazingly successful,” Adam says. “We’re just past the trade deadline and are sitting on a record of 43-17-6 for a total of 92 points and the lead in the Eastern Conference. Our biggest highlight is we’ve had two 7-game win streaks, but a few big trades have also started paying off. Hopefully Tarasenko can come in and give us our additional secondary scoring we’ve needed this year.” 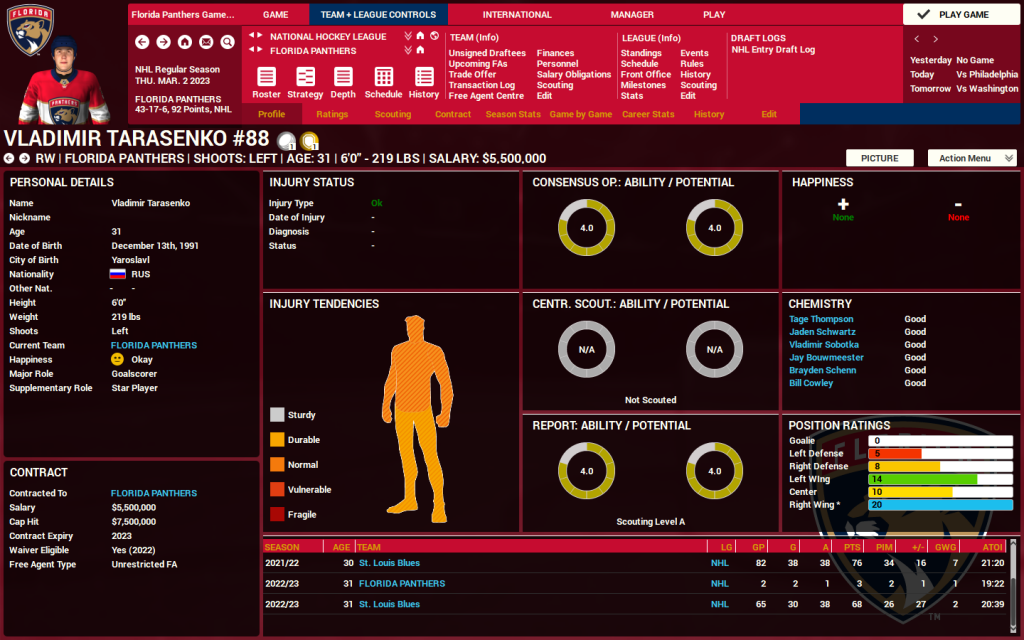 Regarding his strategy, Adam says: “Our systems haven’t really changed that much, as we’re playing a pass-first offense and a strong 2-3 defense tactic. It has worked fairly well with our high-tempo offense as we’ve had several games where we’ve out shot-teams by margins like 40 to 15.”

Looking ahead, he concludes: “Our hope is to finally win a championship before we move on to something else.”