Could Out of the Park Baseball be a useful tool for teaching high school students about business math? That was the question teacher Joshua Dixon, of Lutheran High School in Illinois, asked himself when he decided to bring his love of OOTP into the classroom. He credits our interview with another teacher, Justin Lander, who did something similar, as his inspiration for the idea.

Dixon teaches Business Math, which is focused on consumer math but has some lessons covering owning and maintaining a business, so he thought the front office part of OOTP would be perfect for his students, who would also get the thrill of running a Major League Baseball franchise. Dixon had no trouble getting his principal on board with the idea, since “he was a big fan of the idea of combining a real world application to the information being learned in the classroom,” and soon he was off and running.

“With the business aspect of the class,” Dixon explains, “OOTP helped the students understand the importance of paying for employees (the managers, players, scouts) while making a profit and pleasing the customer base (the fans).” 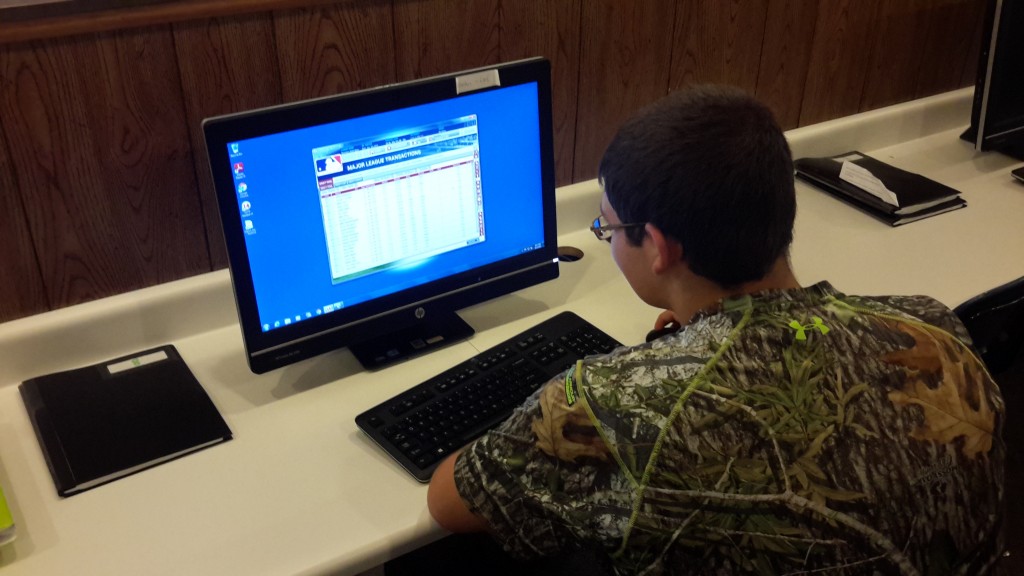 Finding Teams That Were Just Right

Dixon had nine students in the class, and he decided to use the 2013 season. “I had to find a way to pick nine teams that were similar to each other from the business aspect,” he recalls. “I also wanted to create a sort of rivalry among the students.”

He continues: “To do that, I rated all 30 teams at the beginning of the year on a variety of things including market size, fan loyalty, fan interest, and so on, giving each team a rating of 1-30 in each of the categories. I then found the average score of each team. It was a way to rank the teams from best to worst as far as GMing them goes, not just wins and losses. 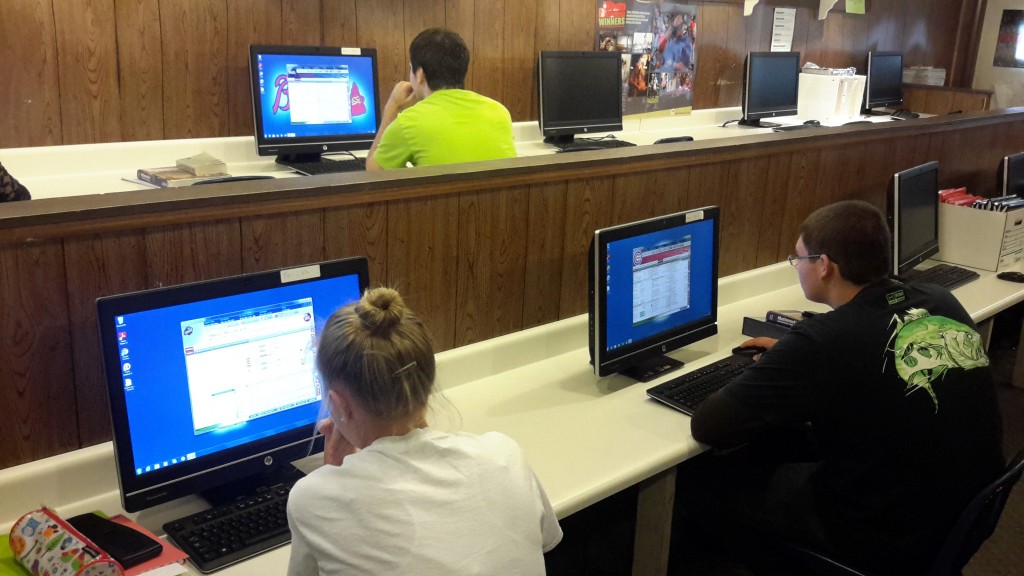 “When all was said and done, the Los Angeles Angels, Seattle Mariners, Texas Rangers, Kansas City Royals, Cleveland Indians, St. Louis Cardinals, Chicago Cubs, Atlanta Braves, and Washington Nationals all had new GMs. I gave the ‘worst ranked’ teams (Kansas City and Seattle) to the students who knew the most about baseball. Thinking ahead, I set it up so that none of the GMs could get fired. 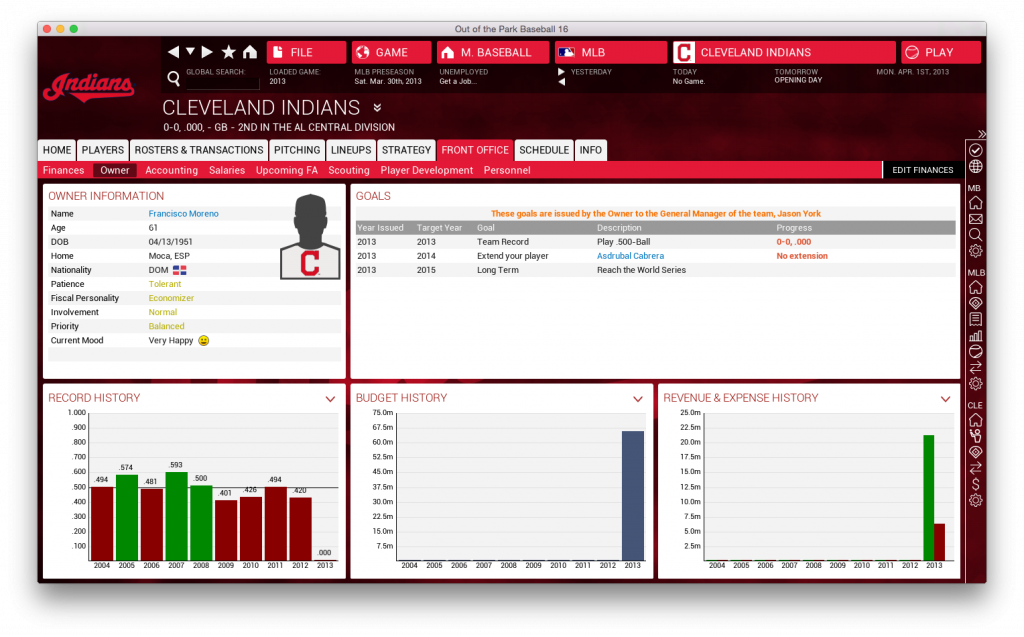 “After all of the initial setup, we started with the default rosters, and the season was off! We simmed a week at a time and then spent 10 minutes or so readjusting the teams, the minor league system, etc. We got through about 2 weeks per day (we spent mainly Fridays working on it), except for the first year player draft, which took the entire class period, and the playoffs.”

The Thrill of Victory, the Agony of Defeat

Dixon’s students eventually found out why running a Major League Baseball team is no easy task, as only two of the nine human GMs were able to guide their clubs into the playoffs. He recalls with amusement: “The student who received the Royals was about 20 games out of first place by the first year player draft, so after the draft he decided to call up every major prospect in the organization and played the rest of the year with a roster of 18-to-22-year-olds. It did not work out.”

One of those human-led teams, St. Louis, was knocked out in the NLDS, but Seattle advanced to the ALCS against the New York Yankees, Dixon remembers. The student helping Seattle was out of school for a week because of surgery that happened to coincide with his team’s big playoff series. “We watched the games at about 10x speed and texted him updates in the hospital,” Dixon says. “The Mariners took a 3 games to 2 lead heading back to New York. After a game in which the Mariners got obliterated 11-2, Game 7 was going the Mariners’ way. 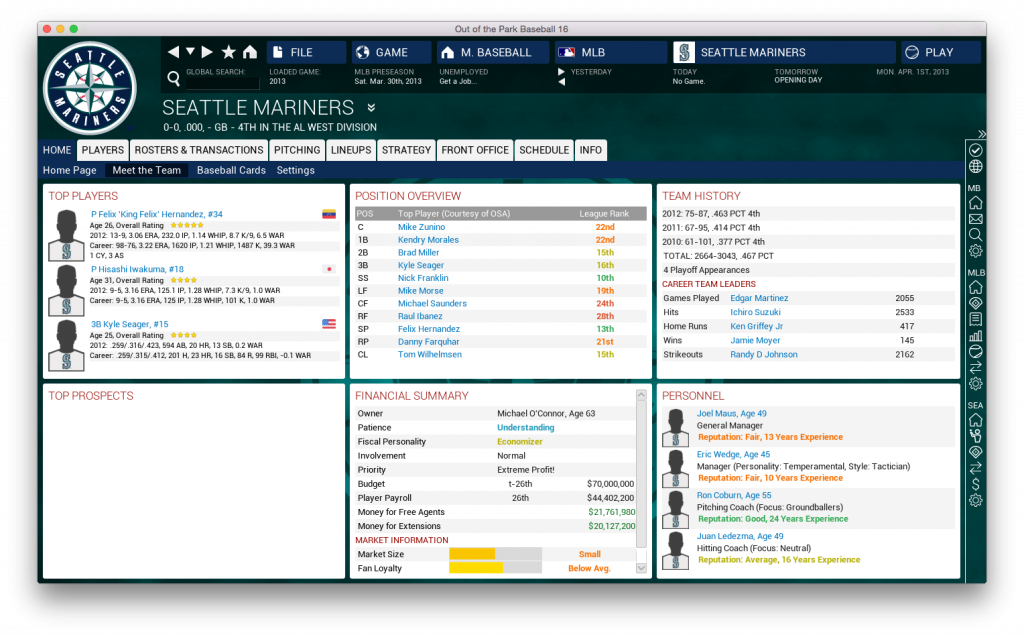 “With two innings left, they had an 6-3 lead. The bullpen allowed a run in the 8th, and the Yankees kept the Mariners scoreless in the top of the 9th. Wilhelmsen had two outs and two on when up comes Robinson Cano, who promptly hit a three-run homer to send the Yankees to the World Series. (They ended up winning against the Dodgers).

“As a class, a group of students with varying degrees of baseball fondness, we experienced the roller coaster of emotions that you feel with a real sports team. I felt bad for the Mariners GM, but it was a heck of a fun time and a great story we talked about for the rest of the year.”

Ironically, that student was a big fan of Cano and had tried hard all season to trade for him with no luck. Dixon says that the student said of the experience: “I had a good time. Had I made better decisions, we could have won the whole thing. I know the fans were happy, and [you told me] the owner was, too. But I still feel kind of disappointed. Next time, let me have Robinson Cano.” 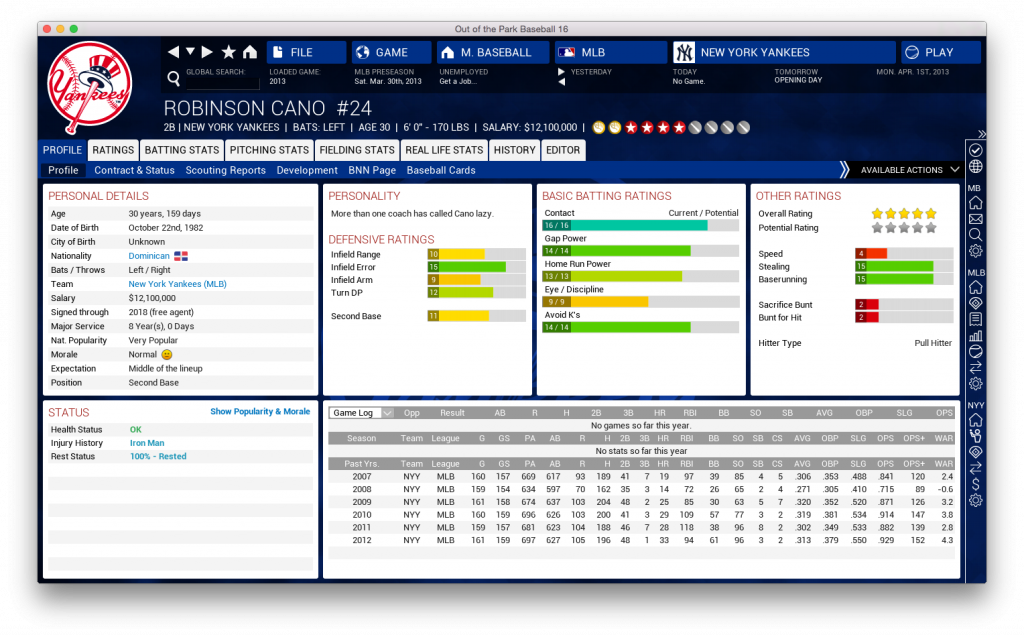 Dixon knows his students’ feelings well, having cut his teeth on a Strat-o-matic-like baseball game when he was six or seven years old and later gravitating toward the front office functions in computer baseball games, even going so far as to heavily mod some of them to improve the GM experience. He discovered OOTP in 2012 while visiting a friend and says of his time spent trying it out: “It was every bit as awesome as he described it.”

Asked why he continues to play OOTP, Dixon replies: “For starters, it takes everything I love about baseball video games — front office management — and multiplies it by a million, and it doesn’t even really allow you to do the one part I never enjoyed anyway: playing the actual game.

“I enjoy the ‘controlled randomness’ of it. It seems so much more realistic than any other baseball game out there.”