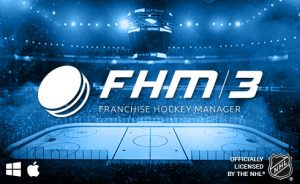 Franchise Hockey Manager (FHM) 3 gives armchair GMs the chance to call the shots on and off the ice, whether they want to take over a modern day team or travel as far back in time as 1931 and take control of an NHL or WHA club. It’s a lot of fun, as OOTP Developments team members Jeff Riddolls and Adam B have shown during their weekly Twitch casts.

They’ve been alternating between two simulations, one with the 1967 Los Angeles Kings, an expansion club, and another with the 2016-17 Detroit Red Wings, who entered that season riding a streak of 25 straight Playoffs-bound years. We talked with each of them about their efforts.

END_OF_DOCUMENT_TOKEN_TO_BE_REPLACED

International competition has provided some of hockey’s most memorable moments. From the 1972 Canada-Russia Summit Series and the American Miracle on Ice in 1980 to the Czech upset win in Nagano in 1998 and the US-Canada showdown in Vancouver in 2010, the intense battles between national teams have showcased hockey at its highest level, both in terms of the quality of play and the drama produced.

It’s not surprising, then, that one of the most frequently requested features for Franchise Hockey Manager has always been the addition of international play. We listened to the fans and this year, for the first time, FHM3 added international tournaments to the game. When you start a game in the 2016-17 season, the 2016 World Cup of Hockey is on the schedule. Other major championship events have been included too.

The fun isn’t just limited to the hockey superpowers, though. FHM3 includes 46 national teams taking part in 11 different competitions and qualifying tournaments. At the very lowest rung of competition, non-traditional hockey countries like South Africa, Bosnia, and the United Arab Emirates can try to climb their way up the national team rankings.

END_OF_DOCUMENT_TOKEN_TO_BE_REPLACED

Franchise Hockey Manager 3 is now available worldwide, so we thought we’d take it for a spin and highlight the major features that armchair hockey GMs have been anticipating the most. Like OOTP Developments’ other games, FHM 3 offers a deep, authentic experience that you can explore any way you want, from a day-to-day, nuts-and-bolts GM view to a “sim a season in minutes and watch a world unfold” commissioner perspective.

Here’s what you can look forward to. There’s much more than this, of course, so please visit the official Franchise Hockey Manager 3 page to learn more and get your copy today.

END_OF_DOCUMENT_TOKEN_TO_BE_REPLACED

Wayne “The Great One” Gretzky is without a doubt one of the greatest players to ever lace up the skates in the National Hockey League. While he came to prominence several years after Gretzky had already established himself as a star, Mario Lemieux is also often in the conversation of greatest of all time.

These two players were competitors throughout their careers (although were linemates during the 1987 Canada Cup), but what if they had gotten the chance to be on the same team in the long term? And even further, what if Lemieux was added to the already stacked Oilers squads of the 80s? It’s one of the greatest NHL dynasties of all time, with Edmonton winning five Stanley Cups in the span of only seven years – a feat that seems quite unlikely to ever happen again in today’s league.

So how much of an offensive force would the Oilers be with both Gretzky and Lemieux? Could the Oilers equal, or better, their dynasty? Read on to find out!

END_OF_DOCUMENT_TOKEN_TO_BE_REPLACED

After running repeated simulations with the opening night NHL rosters, Franchise Hockey Manager 2’s ultra-detailed game engine has made its choice for the 2016 Stanley Cup winner: the New York Rangers.

While the Rangers typically finished the regular season in second or third in the Metropolitan Division, their veteran defenders and outstanding goaltending by Henrik Lundqvist made them tough to beat in the playoffs.

END_OF_DOCUMENT_TOKEN_TO_BE_REPLACED

Editor’s note: For today’s blog, we have invited long-time Out of the Park Developments board member Tiger Fan to share one of his historical simulations with Franchise Hockey Manager 2. Please note: The screenshots have been modified to cover up league logos and player photos. Take it away, Tiger Fan:

Wayne Gretzky, Gordie Howe, Bobby Orr. The argument comes up many times as to who was the greatest player in hockey history. While the Great One and Mr. Hockey enjoyed long, productive and relatively injury-free careers, the same can sadly not be said for number 4, Bobby Orr.

Many of course have wondered about just what kind of numbers Orr could have put up had he been blessed with two good knees and a long career.

FHM2 gives us the opportunity to find out through historical mode. I imported the 1966-67 season, Orr’s rookie year, and made one small edit to Orr, lowering his injury proneness from 17 to 6 with the hopes we will see a full career from him.

I then sat back and let the game engine go to work, simming 15 years ahead to see what might have been for Orr and the Bruins.

END_OF_DOCUMENT_TOKEN_TO_BE_REPLACED

Franchise Hockey Manager 2 features a completely overhauled and reworked game engine that has been built from the ground up.

In short, this is a massive step forward for the series, as the engine is the heart and soul of the game, which allows for the production of realistic results for every league.

HOW WAS IT CREATED?

The development team analyzed game data from many different levels of play to build an accurate statistical model of all the small events that come together to create a hockey game, from battles in the corners and faceoffs to breakaways and fights.

Combined with the information in our player database, this data let us create a match engine that produces accurate statistical results at all levels of play, from junior hockey to the highest professional level.

Because the new engine measures everything so precisely, game situations and coaching decisions will have a much more apparent effect on play.  If you’ve got a group of big, physical forwards, you can order them to dump the puck deep into their opponent’s zone and follow up with aggressive forechecking, relying on their strength to win the ensuing battles for the puck.  Or, if your squad is built with speed in mind, skate the puck in and try to catch the defenders flatfooted.

HOW DOES IT WORK?

END_OF_DOCUMENT_TOKEN_TO_BE_REPLACED

In part 1 of this series, we talked about the process involved with setting up an expansion team. Now let’s look at how our expansion teams make out now that they have been drafted (spoiler alert: it’s not pretty!)

I had taken the helm of the Las Vegas Aces and shortly after the expansion draft, this is how the team was shaping up:

Part of my strategy in taking on the Aces, however, was to keep salary somewhat low and then be an active player in free agency to try to shore up the lineup. It’s why I passed on drafting David Clarkson and his troublesome contract – although the Quebec Nordiques had no problem quickly snapping him up. At any rate, some quick moves were in order: END_OF_DOCUMENT_TOKEN_TO_BE_REPLACED

Welcome back to FHM 2015 The Road to Release. Today we want to take a look at another area that will receive a complete overhaul from the 2014 version: fictional leagues.

Stay tuned for a series of screenshots that show off the new fictional league creation wizard, but, first, let’s review the thinking that went into this:

END_OF_DOCUMENT_TOKEN_TO_BE_REPLACED

Welcome to the Road to Release for FHM 2015. Please note the following before we get started:

With that out of the way, let’s look at the GUI (graphic user interface) in FHM 2015, starting with this shot of the revamped History screen: