The OOTP 16 Road to Release has started, too, with the first edition, a look at the MLB.com license, and the second entry, “Owners, GMs, and Managers — Different Roles, Different Ways to Play.”

Meanwhile, the Grand Championship League post-season tournament has just concluded its third round with a first: No series went nine games. Of course, that was more likely since we were down to eight teams and four series. We now move on to the final four.

So how’d the four series come to their conclusions? And how close was commissioner Mike Branda with his predictions this time? 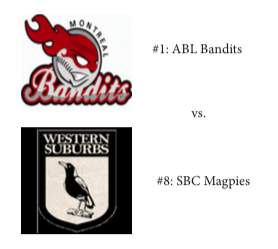 ABL wins, 5-2: The tournament’s top seed continued its run with a 3-1 win in Game 7. A two-run home run in the bottom of the third inning was all the Bandits needed, and SBC struggled to get anything going except in the top of the eighth, when a two-out double and a run-scoring single gave the Magpies a brief glimmer of hope. However, ABL’s starter, Carmelo Gonzales, got the third out of the inning and turned it over to the closer, Ricardo Crus, for his eighth save of the tournament. (Crus’s 0.77 ERA isn’t too bad either.) 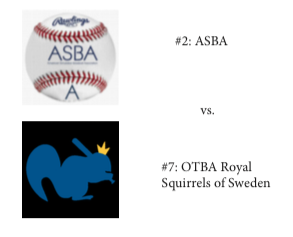 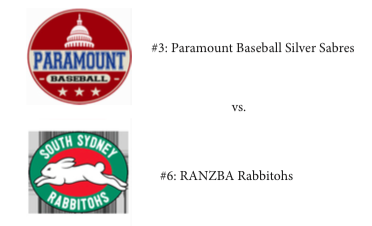 RANZBA wins, 5-3: Their backs against the wall, Paramount surrendered a run to the Rabbitohs in the top of the second and third innings to start the scoring in Game 7. However, a two-run home run in the bottom of the third evened the score, which stayed deadlock until a solo home run put Paramount ahead in the bottom of the seventh. RANZBA came back, though, with some small ball the next inning, using a walk, a pair of stolen bases, and a single to knot the score.

It remained tied, with neither team mounting much of a threat, until the bottom of the 15th inning, when a two-out, two-run home run gave Paramount the victory.

Game 8 also went to extra innings as Paramount broke a 3-3 tie with a run in the seventh inning and another in the eighth. However, the Rabbitohs would not be denied, and they led off the bottom of the ninth with a single. A ground out advanced the runner and a strike-out put a hush in the capacity crown, but James Mathis worked a seven-pitch at-bat that included four foul balls before launching a two-run home run that sent the game to the tenth and put the crowd on its feet again.

RANZBA then rewarded its fans in the bottom of the tenth inning as lead-off hitter Lewis Wilson, he of eight home runs in 59 games during the regular season, blasted a 462-foot home run on an 0-2 count. Game 8 and the final four were theirs, 6-5. 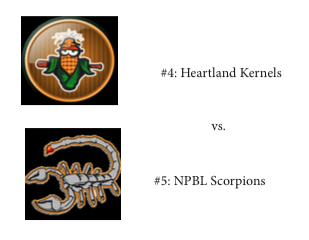 Heartland wins, 5-2: A double sandwiched by a pair of singles put Heartland ahead, 2-0, in the bottom of the third inning in Game 7. NPBL answered the next inning with a walk, a single that moved the runner to third, and a sacrifice fly, but they didn’t have another good chance to score until the top of the ninth.

The first two batters went down on strikes, but Willie Vogel doubled and Mike Lehman singled. The base hit was relatively shallow in left field, but Vogel was running on contact and rounded third. Kernels left fielder Nelson Cruz charged the ball and made a one-hop throw to catcher Juan Diaz, who slapped the tag on Vogel as he tried to slide around him. The umpire immediately signaled “out” and Vogel sat in the dirt, his head down, as the Heartland team erupted.