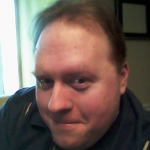 We’ve dubbed this series “Show us your league” and plan future installments. If you would like to join the fun, or know of a league (solo or online) that would make a good feature, please drop us a line.